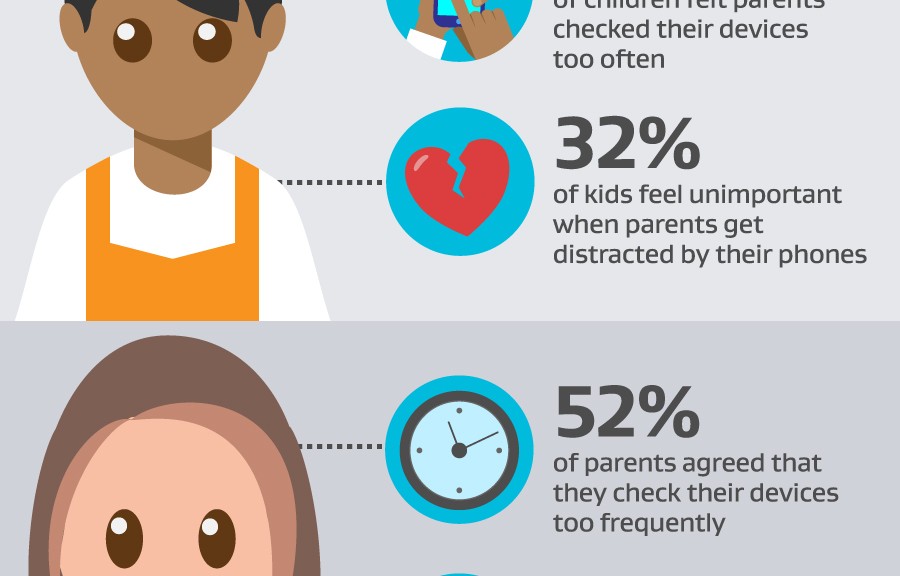 AMSTERDAM – June 24, 2015 – Mobile phones are gaining an increasing share in the battle for parental attention, with a third of children, surveyed for a recent study, saying their parents spent equal or less time with them, than on their devices. The research, conducted by AVG® Technologies N.V. (NYSE: AVG), the online security company™ for more than 200 million monthly active users, examined children’s perceptions of their parents’ mobile device use, and uncovered some worrying trends.

Hinting at ongoing digital intrusion upon family life, over 50 percent of the children questioned, felt that their parents checked their devices too often (54 percent); and their biggest grievance, when given a list of possible, bad device habits, was that their parents allowed themselves to be distracted by their device during conversations (36 percent) – something that made a third of the complainants feel unimportant (32 percent).

When asked about their device use, half of all parents agreed that it was too frequent (52 percent), and many also worried about how this looked to the younger generation. Almost a third (28 percent) felt that they didn’t set a good example for their children with their device use.

“With our kids picking up mobile devices at an increasingly younger age, it is really important that we set good habits within the home, early on,” said Tony Anscombe, Senior Security Evangelist at AVG Technologies. “Children take their cues from us for everything else, so it is only natural that they should do the same with device use. It can be hard to step away from your device at home; but with a quarter of parents telling us that they wished their child used their device less (25 percent), they need to lead by example and consider how their behavior might be making their child feel.”

AVG commissioned an online survey, interviewing parents and their children, between the ages of 8-13, to identify perceptions and realities of parental device use in the following markets: Australia, Brazil, Canada, Czech Republic, France, Germany, New Zealand, the United Kingdom and the United States. A total of 6,117 completed the survey during June 2015. The market research company, Research Now, carried out the fieldwork using their proprietary panels.