Open source developers who use the popular code-sharing site GitHub were put on alert after the discovery of a phishing email campaign that attempts to infect their computers with an advanced malware trojan.

During the Christmas holidays, my mother received this email from a well-meaning friend. Since her daughter works for the most trusted security company in the world, she immediately asked me about the authenticity of the message.

PLEASE FORWARD THIS WARNING AMONG FRIENDS, FAMILY AND CONTACTS!

You should be alert during the next few days. Do not open any message

with an attachment entitled POSTCARD FROM HALLMARK , regardless of who sent it to you.

It is a virus which opens A POSTCARD IMAGE, which ‘burns’ the whole

hard disc C of your computer.

This is the reason you need to send this e -mail to all your contacts.

If you receive an email entitled “POSTCARD,” even though it was sent to

you by a friend, do not open it! Shut down your computer immediately.

This is the worst virus announced by CNN.

It has been classified by Microsoft as the most destructive virus ever.

This virus was discovered by McAfee yesterday, and there is no repair

yet for this kind of Virus.

This virus simply destroys the Zero Sector of the Hard Disc, where the

COPY THIS E-MAIL AND SEND IT TO YOUR FRIENDS.

REMEMBER: IF YOU SEND IT TO THEM, YOU WILL BENEFIT ALL OF US

This particular email has been around for years, and you have probably seen one of its incarnations. Although there are real incidents of malware being distributed via e-cards, this is a bogus, unsubstantiated hoax.

The language is quite strong – phrases like the worst virus and the most destructive virus ever are sure to get the attention of security-minded people. The problem is that the email fails to provide any authentic details to learn more about the threat, just vague announcements and classifications.

“The email doesn’t actually mention a specific virus,” said Jan Zika, an Avast Virus Lab analyst. “Sure some viruses use the “Postcard” social engineering method to trick users to click the link, but this email has been circulating for a couple of years now, and it never says which virus it is.”

The email does say what the virus can do, This virus simply destroys the Zero Sector of the Hard Disc, where the vital information is kept, and it burns the whole hard disc C of your computer. Pretty scary stuff!

“No, it cannot burn anything, and no, it is not most destructive virus ever,” said Zika. His advice? “It’s best to avoid such messages unless you can confirm that the threat is real.”

Protect yourself against email hoaxes 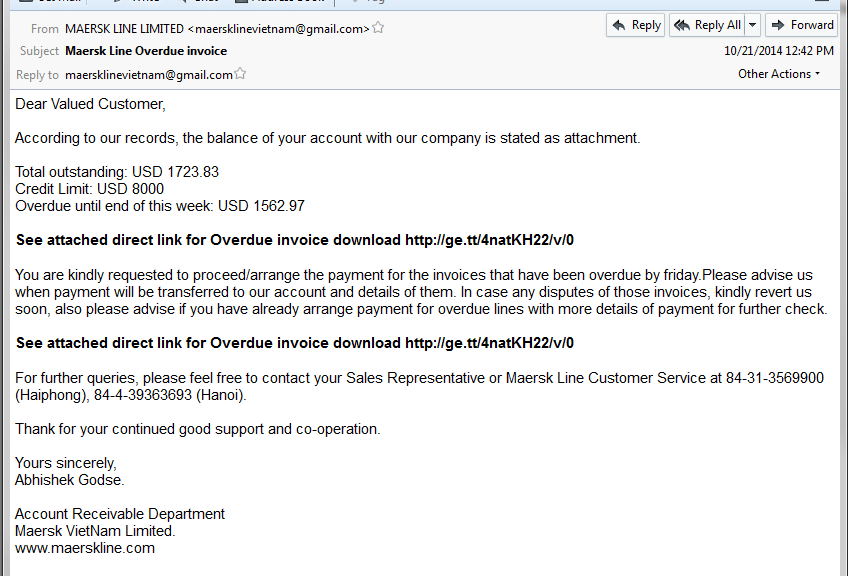 Most people want to stay on top of their bills, and not pay them late. But recently, unexpected emails claiming an overdue invoice have been showing up in people’s inboxes, causing anxiety and ultimately a malware attack. Read this report from the Avast Virus Lab, so as a consumer you’ll know what to look for, and as a systems administrator for an SMB or other website, you will know how cybercrooks can use your site for this type of social engineering scam.

Recently we saw an email campaign which attempted to convince people to pay an overdue invoice, as you can see on the following image. The user is asked to download an invoice from the attached link. 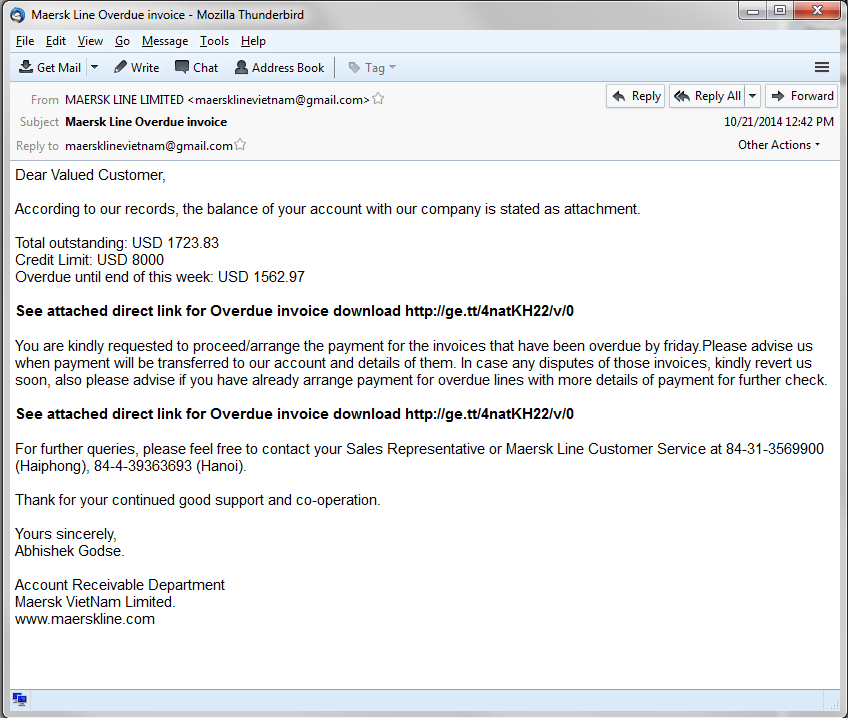 The downloaded file pretends to be a regular PDF file, however the filename â€œTotal outstanding invoice pdf.comâ€ is very suspicious.

When the user executes theÂ malicious file, after a few unpacking procedures, it downloads the final vicious payload. The Avast Virus Lab has identified this payload as Pony Stealer, a well-known data-stealing Trojan which is responsible for stealing $220,000, as you can read here.

We followed the payload URL and discoveredÂ thatÂ itÂ was downloaded from a hacked website. The interesting part is that we found a backdoor on that site allowing the attacker to take control ofÂ  the entire website. As you can see, the attacker could create a new file and write any data to that file on the hacked website, for example, a malicious php script.

Because that website was unsecured, cybercrooks used it to place several Pony Stealer administration panels on it, including the original installation package,Â and some otherÂ malware samples as well.Â  You can see an example ofÂ Pony Stealer panel’sÂ help page writtenÂ in the Russian language on the following picture. 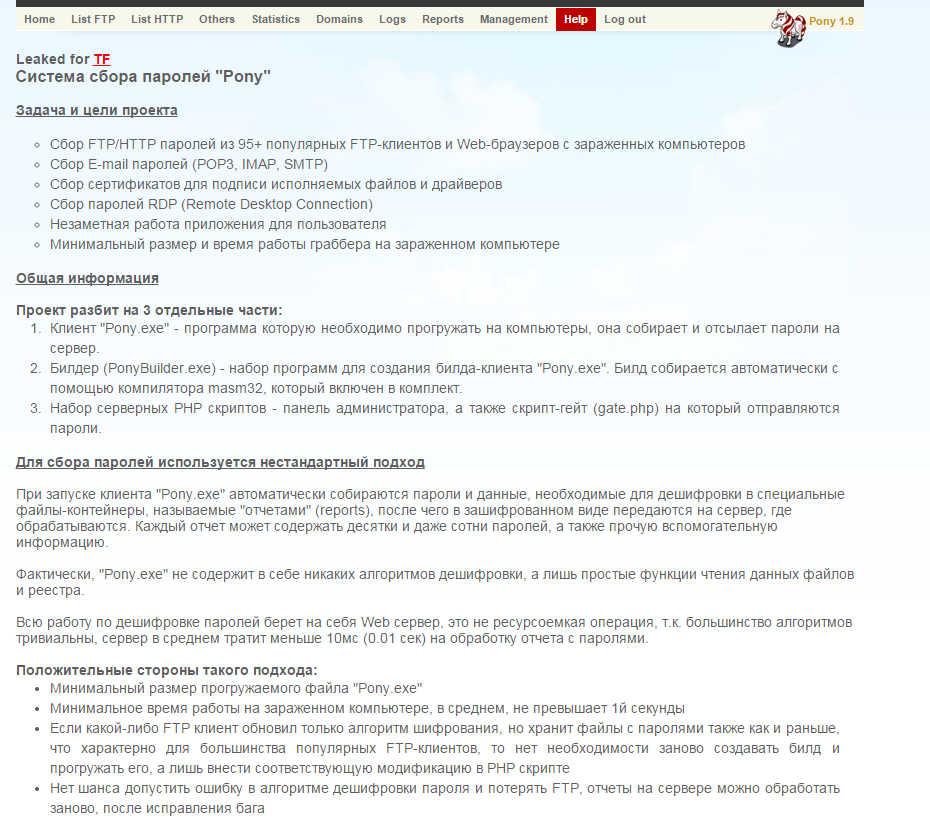 For Consumers: Use extreme caution if you see an email trying to convince you to pay money for non-ordered services. This use of “social engineering” is most likely fraudulent. Do not respond to these emails.

For SMBs: If you are a server administrator, please secure your server and follow the general security recommendations. As you learned from this article,Â  you can be hacked and a backdoor can be put in your website allowing anyone to upload whatever he wants to your website. Protect yourself and your visitors!

I would like to thank Jan ZÃ­ka for discovering this campaign.

Thank you for using avast! Antivirus and recommending us to your friends and family. For all the latest news, fun and contest information, please follow us onÂ Facebook,Â TwitterÂ andÂ Google+. Business owners â€“ check out ourÂ business products.