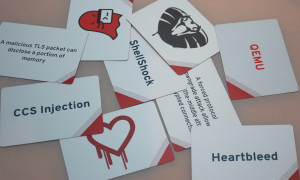 ABRT (Automatic Bug Reporting Tool) is a tool to help users to detect defects in applications and to create a bug report. ABRT was vulnerable to multiple race condition and symbolic link flaws. A local attacker could use these flaws to potentially escalate their privileges on an affected system to root.

This issue affected Red Hat Enterprise Linux 7 and updates were made available. A working public exploit is available for this issue. Other products and versions of Enterprise Linux were either not affected or not vulnerable to privilege escalation.

Red Hat JBoss Operations Network is a middleware management solution that provides a single point of control to deploy, manage, and monitor JBoss Enterprise Middleware, applications, and services. The JBoss Operations Network server did not correctly restrict access to certain remote APIs which could allow a remote, unauthenticated attacker to execute arbitrary Java methods. We’re not aware of active exploitation of this issue. Updates were made available.

Venom was a branded flaw which affected QEMU. A privileged user of a guest virtual machine could use this flaw to crash the guest or, potentially, execute arbitrary code on the host with the privileges of the host’s QEMU process corresponding to the guest.

A number of Red Hat products were affected and updates were released. Red Hat products by default would block arbitrary code execution as SELinux sVirt protection confines each QEMU process.

TLS connections using the Diffie-Hellman key exchange protocol were found to be vulnerable to an attack in which a man-in-the-middle attacker could downgrade vulnerable TLS connections to weak cryptography which could then be broken to decrypt the connection.

Like Poodle and Freak, this issue is hard to exploit as it requires a man in the middle attack. We’re not aware of active exploitation of this issue. Various packages providing cryptography were updated.

A flaw in the Berkeley Internet Name Domain (BIND) allowed a remote attacker to cause named (functioning as an authoritative DNS server or a DNS resolver) to exit, causing a denial of service against BIND.

This issue affected the versions of BIND shipped with all versions of Red Hat Enterprise Linux. A public exploit exists for this issue. Updates were available the same day as the issue was public.

The libuser library implements a interface for manipulating and administering user and group accounts. Flaws in libuser could allow authenticated local users with shell access to escalate privileges to root.

A flaw in Mozilla Firefox could allow an attacker to access local files with the permissions of the user running Firefox. Public exploits exist for this issue, including as part of Metasploit, and targeting Linux systems.

This issue affected Firefox shipped with versions of Red Hat Enterprise Linux and updates were available the next day after the issue was public.

Mozilla Firefox normally warns a user when trying to install an add-on if initiated by a web page.  A flaw allowed this dialog to be bypassed.

This issue affected Firefox shipped with Red Hat Enterprise Linux versions and updates were available the same day as the issue was public.

The issues examined in this report were included because they were meaningful.  This includes the issues that are of a high severity and are likely easy to be exploited (or already have a public working exploit), as well as issues that were highly visible or branded (with a name or logo), regardless of their severity.

Between 1 April 2015 and 31 October 2015 for every Red Hat product there were 39 Critical Red Hat Security Advisories released, addressing 192 Critical vulnerabilities.  Aside from the issues in this report which were rated as having Critical security impact, all other issues with a Critical rating were part of Red Hat Enterprise Linux products and were browser-related: Firefox, Chromium, Adobe Flash, and Java (due to the browser plugin).

Our dedicated Product Security team continue to analyse threats and vulnerabilities against all our products every day, and provide relevant advice and updates through the customer portal. Customers can call on this expertise to ensure that they respond quickly to address the issues that matter.  Hear more about vulnerability handling in our upcoming virtual event: Secure Foundations for Today and Tomorrow.

Red Hat Enterprise Linux 5 is in Production 3 phase, being over seven years since general availability in March 2007, and will receive security updates until March 31st 2017.

The chart below illustrates the total number of security updates issued for Red Hat Enterprise Linux 5 Server if you had installed 5.10, up to and including the 5.11 release, broken down by severity. It’s split into two columns, one for the packages you’d get if you did a default install, and the other if you installed every single package.

Note that during installation there actually isn’t an option to install every package, you’d have to manually select them all, and it’s not a likely scenario. For a given installation, the number of package updates and vulnerabilities that affected your systems will depend on exactly what you selected during installation and which packages you have subsequently installed or removed.

For a default install, from release of 5.10 up to and including 5.11, we shipped 41 advisories to address 129 vulnerabilities. 8 advisories were rated critical, 11 were important, and the remaining 22 were moderate and low.

For all packages, from release of 5.10 up to and including 5.11, we shipped 82 advisories to address 298 vulnerabilities. 12 advisories were rated critical, 29 were important, and the remaining 41 were moderate and low.

You can cut down the number of security issues you need to deal with by carefully choosing the right Red Hat Enterprise Linux variant and package set when deploying a new system, and ensuring you install the latest available Update release.

Vulnerabilities rated critical severity are the ones that can pose the most risk to an organisation. By definition, a critical vulnerability is one that could be exploited remotely and automatically by a worm. However we also stretch that definition to include those flaws that affect web browsers or plug-ins where a user only needs to visit a malicious (or compromised) website in order to be exploited. Most of the critical vulnerabilities we fix fall into that latter category.

Updates to correct 32 of the 33 critical vulnerabilities were available via Red Hat Network either the same day or the next calendar day after the issues were public.

Overall, for Red Hat Enterprise Linux 5 since release until 5.11, 98% of critical vulnerabilities have had an update available to address them available from the Red Hat Network either the same day or the next calendar day after the issue was public.

Although not in the definition of critical severity, also of interest are other remote flaws and local privilege escalation flaws:

Note that Red Hat Enterprise Linux 5 was not affected by the OpenSSL issue, CVE-2014-0160, “Heartbleed”.

We generally measure risk in terms of the number of vulnerabilities, but the actual effort in maintaining a Red Hat Enterprise Linux system is more related to the number of advisories we released: a single Firefox advisory may fix ten different issues of critical severity, but takes far less total effort to manage than ten separate advisories each fixing one critical PHP vulnerability.

To compare these statistics with previous update releases we need to take into account that the time between each update release is different. So looking at a default installation and calculating the number of advisories per month gives the following chart:

This data is interesting to get a feel for the risk of running Enterprise Linux 5 Server, but isn’t really useful for comparisons with other major versions, distributions, or operating systems — for example, a default install of Red Hat Enterprise Linux 4AS did not include Firefox, but 5 Server does. You can use our public security measurement data and tools, and run your own custom metrics for any given Red Hat product, package set, time scales, and severity range of interest.